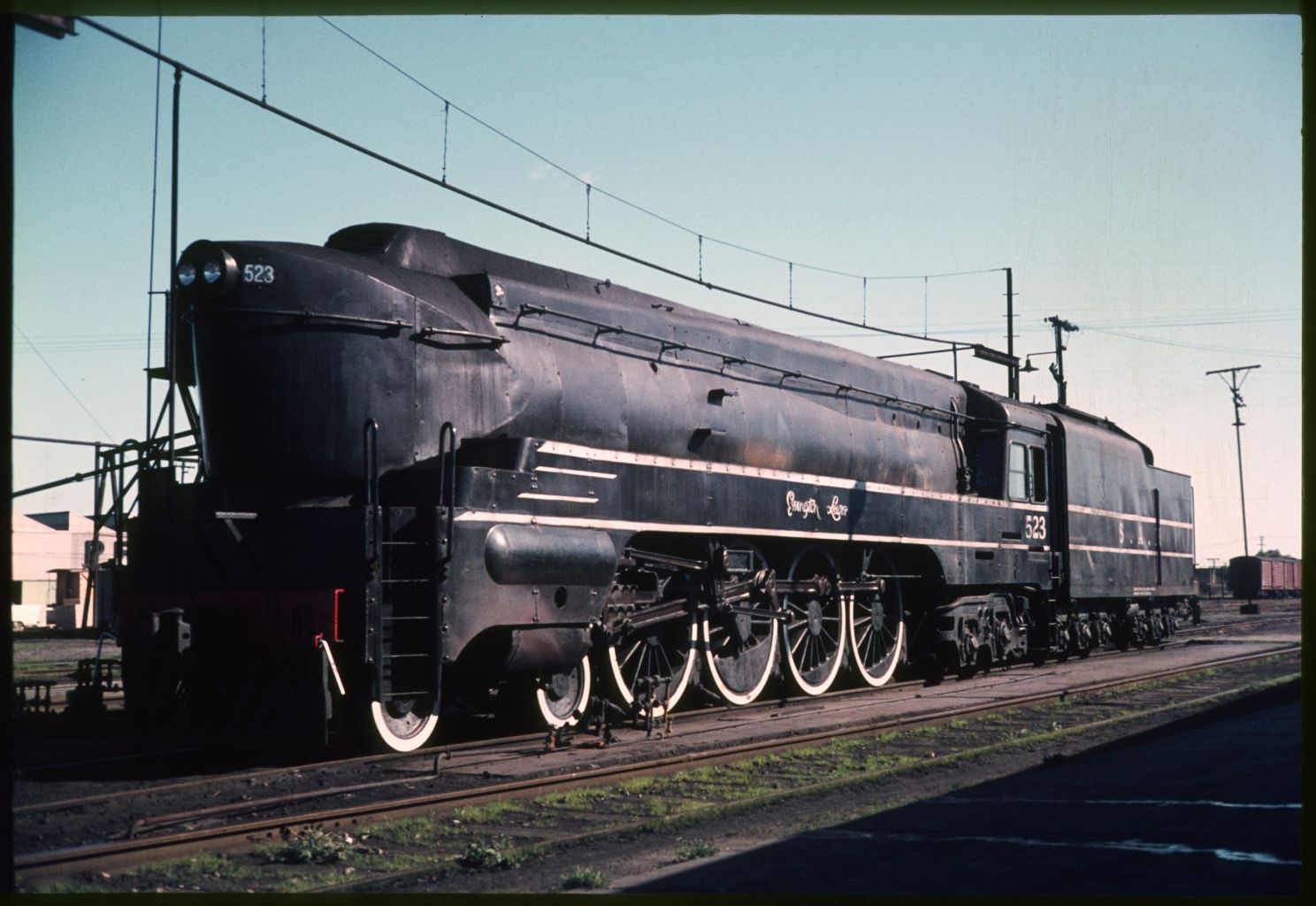 Locomotive 523 is representative of a class of locomotives which has come to be among the best known of the South Australian big power engines. This was partly because of their versatility which caused them to be the last of the big engines to survive (at least partially) into the era of the diesel.

The 520 class consisted of 12 very large engines, which were built during the Second World War as a result of a shortage of motive power suitable for serving the heavily-trafficked broad gauge line from Adelaide to Port Pirie. At that time this line was a vital link in the flow of supplies and troops to the threatened northern shores of Australia.

The class was designed and built by the South Australian Railways Chief Mechanical Engineer, Mr F.H. Harrison, at the Islington Workshops. They were very versatile engines: although they weighed over 200 tons, the weight was spread over 28 wheels, on engine and tender, thus allowing them to run on light 60 lb track.

They were fitted with 5’ 6’’ diameter driving wheels, which were specially balanced for 70m/h running. This meant that they were especially useful on the fast passenger expresses on the Port Pirie line, but were also invaluable on fast passenger and goods trains on all the main lines. Indeed for many years they were rostered to work the famous Broken Hill produce train. However, they were equally at home on the lightly laid branch lines, and were to be found as far afield as Pinnaroo, Moonta, Gladstone and Morgan.

523 was the first of the class to be built with a slightly modified front end, which hid the short chimney (visible on 520, 521 and 522) by the inclusion of a small built up piece fronted by a louvred opening. Also, the slope on the chisel nose was considerably reduced in 523 and later engines. Like the others in the class, 523 was designed for a service maximum speed of 70 m/h, and in fact frequently attained this speed. Easy running at this speed was helped by the fact that the class was fitted with Timken roller bearings on all wheels - the first engines in Australia to be so fitted.

523 was named Essington Lewis after the then General Manager of the Broken Hill Proprietary Company – Australia’s largest privately owned company. Built in 1944, the engine was converted on 1st July 1949 to burn a combination of coal and oil. This was partly because of problems in getting coal to slide forward in the tender, and partly because of difficulties acquiring sufficient coal. 523 was later modified externally by the removing the front cowling, which simplified maintenance.

Although built as late as 1944, it was to be only seven years before the first main line diesels appeared, to operate on the very routes that the big engines were most at home on. Like the rest of the class the big 4-8-4 continued to operate on the fast Port Pirie and Terowie trains for some time, but the amount of work for it dwindled until by the mid-1960’s it was considered to be redundant. 524 worked the last broad gauge regular steam train when it handled the Port Pirie Passenger on 24th October 1966.